Every spring, Paris plays host to a massive agricultural expo, called the Salon de l’Agriculture. Held in the exact same location as my beloved Salon du Chocolat (but about 18 times larger), this event is something I’ve been curious about since seeing it featured briefly on TV once, and since wondering whether there was a Salon du Fromage or something of equally delicious interest.

With a mind to see some cows and taste some cheese, Frenchman and I decided to pay a visit to this festival of French agriculture.

We did not know what we were getting into.

We bought our tickets and made our way to the Porte de Versailles convention and expo area, blissfully unaware of the chaos that awaited us. I honestly cannot convey to you the immense scale of this event.

For some perspective, the Salon du Chocolat is held every year in Pavilion 5 of the Porte de Versailles compound and includes more than 200 large booths with room to spare for a runway and other staging areas. The Salon de l’Agriculture occupies EIGHT (8) pavilions, containing (apparently) more than 4,000 animals from bulls to bunnies, plus show rings and educational areas and stands selling all kinds of agriculture-based products from food to leather belts and knit hats.

With an entire day ahead of us and literal thousands of things to see, we decided to start from the beginning. To Pavilion 1! Cows and sheep and piggies.

The salon is THE big event for farmers and cityfolk alike. Caravans of animals, plants, food, and goods are trucked in from every corner of France. It’s all over the news, with specials showing farmers shoving stubborn cattle into trailers. People come from all over, too, including the presidential candidates. Apparently it’s a “thing” for them to make an appearance to pet a cow and greet the farm folk. French politics: just like home!

The expositions are divided by type of animal, as well as by region of France, so you can see cows from Normandy, Bretagne, etc. It’s very cool to see the pride and ownership of each region for what comes from their home. 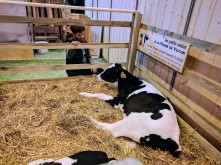 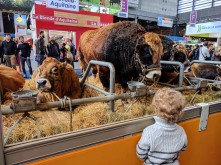 After lots of time ogling massive cows of all varieties, some of which absolutely dwarf traditional dairy cows, and a stunned pause in front of the most enormous pig I have ever seen (Frenchman’s favorite sight of the day), we eventually moved on to the Fruits, Veggies & Plants exhibition. By this point, however, we were starting to get hungry, so we quickly moved on from veggies to the big hall chock FULL of food vendors.

Hawking everything from crêpes and cider in “Bretagne” to lots and lots of wine in Bordeaux and Bourgogne, to oysters in Aquitaine and sandwiches of saucisson and cheese stuffed in here, there, and everywhere. It was chaos, and it was wonderful. 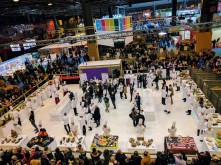 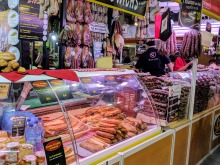 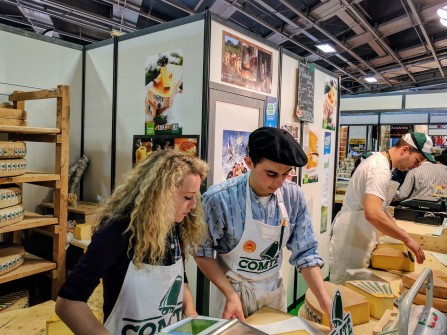 After acquiring a sandwich and taking a welcome sit, we re-entered the fray and quickly discovered the oddest foodstuff: Tourteaux. These blackened domes are apparently a specialty of Poitou, made with fromage frais, and are eaten as a digestif, dessert, with the cheese course, as an afternoon snack, for breakfast… basically anytime of day. We got a sample and were hooked! 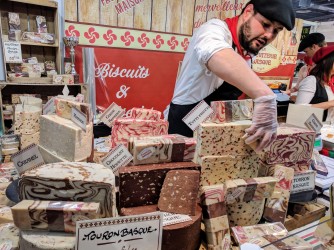 Now, for those of you keeping count, that puts us at just 3 pavilions out of the 8 at the Salon de l’Agriculture. We were slowing down, but we didn’t stop there. We had the International products, Horses, Bunny, and Canine pavilions to get to! 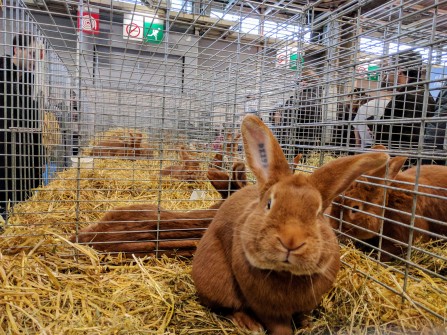 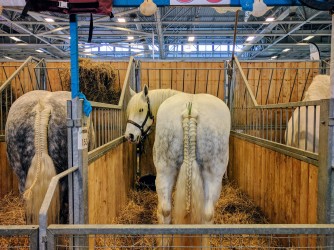 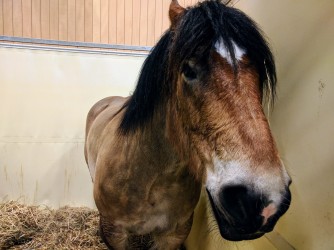 Frankly, after the massive horses and humongous breeds of cattle, the Dog pavilion was a huge letdown. The first thing we saw was another show ring, where they were showing not Mastiffs or Great Pyrenees or something else equally impressive. They were showing… Boston Terriers. Just a pack of tiny terriers scuttling about on their itty bitty legs. It was comical in comparison to what we had just seen.

We didn’t last long in the Canine building after such a long day on our feet. We came, we saw, we bought a few treats. We even touched a few soft bunnies. We packed it in and worked our way out of the huge expo complex to head home.

For anyone interested in braving the crowds, the Salon de l’Agriculture is still open! It runs through this weekend (until Sunday March 5th). And, of course, there’s always next year.